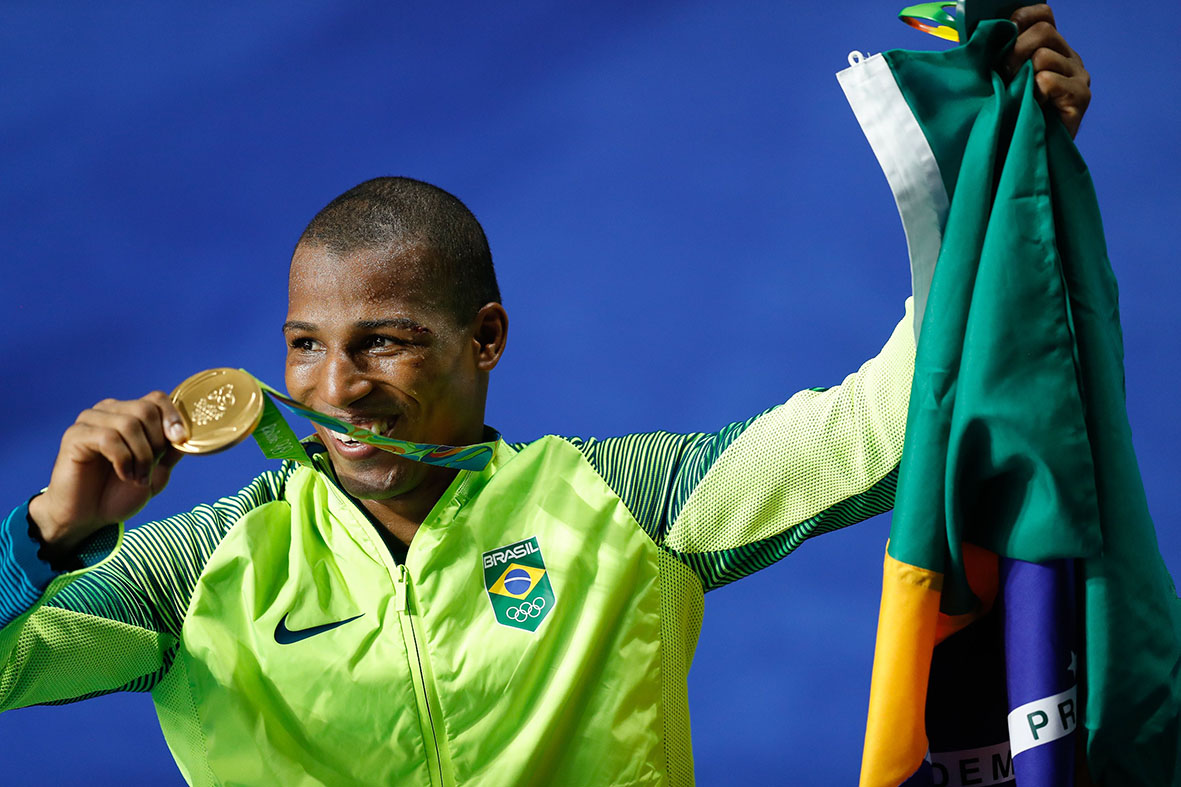 (Rio de Janeiro, brpress) – While all local attentions in Brazil go for canoeist Isaquias Queiroz, who has become the first Brazilian to win three medals in the same Olympic Games – alongside Erlon Silva, he won silver at the men’s double 1,000m canoe sprint final on Saturday (Aug. 20), a bronze medal in the 200m canoe sprint and, earlier this week, he won silver in the 1,000m individual sprint –, in the railroad suburb of Salvador, in Bahia state, the biggest city of Brazil Northeast, a big and modest space hosts a scene of generosity of two fighters who spend part of their day teaching boxing to children and adults. One of them is Robson Conceição, Rio 2016 Olympics gold medalist in the 60-kilogram boxing weight class.

The Luta Cidadã [“Citizen Struggle”] project is carried out by the Community Security Base of Bahia’s Military Police. The boxing classes happen in the association’s headquarters. Currently, about 100 young people take part in the initiative. One of Conceição’s students, Lucas Conceição, 16 years old, coincidentally shares the last name of the teacher, who he daily takes as model. Despite his young age, Lucas finished three times on the podium, in state and national championships. Last year, he was champion of a national competition, and has been state champion twice in his class. He said the project changed his life.

Out of the streets

“Robson is a very good athlete. He is always here training with us. He trusts me and I’m training to do the same he does, to reach where he has reached – the Olympic podium. I am glad to be part of this project because as a boy I was always wandering around the streets, getting into fights, and rarely going to school. Boxing changed my life since he [Robson Conceição] invited me to the classes,” said the boy who is already very committed to the sport.

During one of the classes in the corner of the room, Aslane Gonçalves, mother of little Sofia, 8, boxing for three months, waited for the end of the class. For her, the project is an instrument of social change and has exerted a positive impact on her daughter’s behavior. She has improved her school performance and has been more disciplined at home. “She learns a lot from boxing. Robson and Alemão are great teachers. I noticed she is working harder when she decides that she wants something; that’s very rewarding,” says the 24-year old housewife.

In one of the classes, during warm up exercises, dozens of children counted the repetitions aloud. Among them, the other teacher Edvaldo de Souza, known as Alemão, was correcting every wrong move. Friend of the Olympic champion Robson Conceição, the coach talks about their challenge to get the appropriate equipment for the young students, but believes that it is still worth encouraging child athletes to follow the same steps as the champion teacher.

“In addition to the proud of being Robson’s friend, there is the responsibility for the students’ education and behavior. I always go to their school and talk to their teachers about their behavior and performance. It’s a lifelong commitment to the project, because it’s an outstanding example,” said the boxer.

Robson Conceição had a poor childhood. The boxer, 27, helped his grandmother in the market, sold popsicles and was bricklayer’s assistant. After being eliminated in two Olympics (Beijing 2008 and London 2012), the athlete finally reached the top of the Olympic podium in his country.

His volunteer colleague, Alemão, gets choked up when speaking about the old friend’s determination. “I feel like crying, because I know Robson from the beginning. He was a warrior and faced several difficulties. His victory was well deserved because he suffered a lot. Now it’s his moment and this medal had to be ours,” said the coach.

Coach Alemão works as bus ticket collector and after his working hours, teaches boxing. Conceição, who had been preparing for the Olympics for some time, breaks his training routine with the volunteer work in the evenings.

Despite the support from the Community Security Base, income to keep the space is not enough. Alemão says he and Conceição usually buy equipment, like gloves and punching bags, with their own money, having to share the amount “in several instalments.”

Alemão noted that things are not easy and things are not always good, but that he feels as the students’ father and feels very proud of his choice to continue running the project. Bahia’s governor, Rui Silva, has complimented the Olympic medalist in a huge street party in Salvador, promising that is going to be built a Boxing Centre in the capital. “Sports help saving lives”, Robson Conceição says.