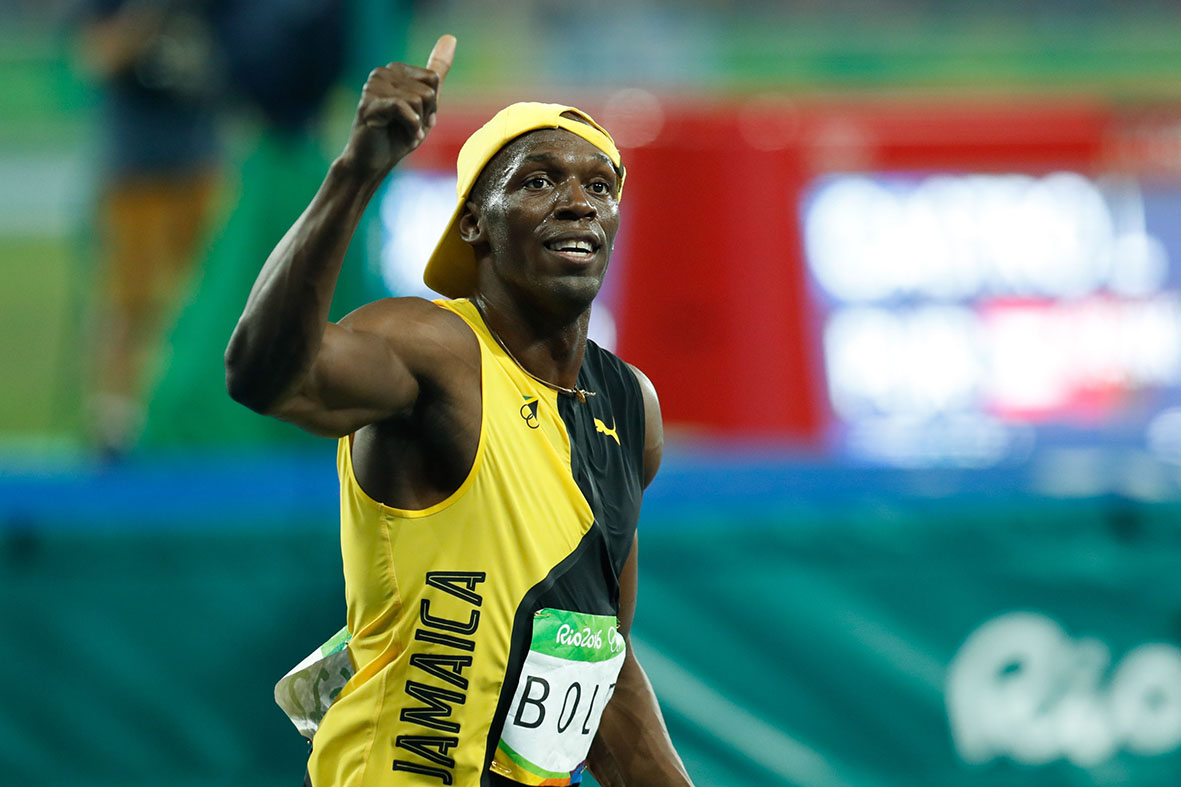 (Rio de Janeiro, brpress) - On Sunday night (August 14th) Bolt ended winning the 100m in 9.81 seconds and completing the first part of his bid for an unprecedented “tripe-triple” in Rio 2016.

(Rio de Janeiro, brpress) – Usain Bolt’s feverishly anticipated first sporting activity at the Rio 2016 OIympic Games went according to plan as he cruised through his 100m heat on Saturday morning (13 August) in a time of 10.07 seconds. However, the man himself was not particularly impressed with his own performance at the Olympic Stadium, describing it as “kinda sluggish”. On Sunday night (August 14th) Bolt ended winning the 100m in 9.81 seconds and completing  the first part of his bid for an unprecedented “tripe-triple”.

The Jamaican sprinter’s arrival on track was greeted with a deafening roar from the thousands of fans massed inside the Olympic Stadium to see him. The 29-year-old Jamaican praised the crowd in the Olympic Stadium after the race. “It’s unbelievable, the energy they gave me, it’s just great,” he said. “It felt like I was in a football stadium. Thanks for your support, keep on supporting me, I have two more races to go, so watch out!”

The sprinter also tweeted soon after his victory dedicating his triumph to his country: “Jamaica Stand Up!!!  This for you my people”. After his customary langourous start, the Jamaican speed past the rest of the field – including arch-rival Justin Gatlin – and finished without breaking his own record of 9.63 seconds in London 2012 and the world record of 9.58 seconds that Bolt himself obtained in Germany, in 2009.

As he won at the Beijing 2008 and London 2012 Games, Bolt now becomes the first person to win three consecutive Olympic 100m titles. “Somebody said I can become immortal,” he said afterwards. “Two more medals to go and I can sign off. Immortal. It’s a good start. There will always be doubters. But I’m in better shape than last season”, Bolt guaranteed.

Usain Bolt has been treated like a rock star in Rio. “I want to be three times champion, and this Olympics would be a perfect moment to do it”, insists the world’s fastest man, despite his build-up to Rio had been far from ideal: he pulled out of the Jamaican trials with a hamstring injury and, after proving his fitness at the London Annivesary Games, he had been keeping a low profile in Brazil.

Undoubtedly the Jamaican is, besides Michael Phelps, the top highlight of this Olympics. Last week he was seen dancing samba with some “mulatas” (samba professional dancers) in an event at Cidade das Artes, before attracting a huge crowd to Engenhão – a refurbished stadium in the North zone of Rio (a city obsessed with its South – and richest – zone) where athletics are taking place. On his Twitter account, Bolt called the public to “buy a ticket and come to see him making history in Rio”.

The Engenhão’s great racing atmosphere was transferred on Sunday’s late night to Jamaica House in Gavea, a Rio’s chic neighbourhood, with hundreds of Jamaicans celebrating Usain Bolt’s 100m victory – among them the country’s prime minster Andrew Holness. He popped in from the Olympic Stadium to sing Bolt’s praises as Bob Marley’s One Love boomed out in the background.

“I’m proud of Usain Bolt, he’s a once in a century kind of athlete, he demonstrates what humankind can do with hard work and commitment”. Holness continued: “Usain has has achieved what I consider to be an almost impossible feat. He is our beloved son, and from what I saw in the stadium, the world is proud of him. The stadium was literally willing him to win. It was an electrifying experience, I’ve never witnessed anything like it before and I don’t think I will again.”

Rio might  be Bolt’s last Olympic Games – he will turn 30 on the day of the closing ceremony – and the six-time Olympic champion has commented on his retirement in 2017 after the world championships, at which he will only run in the 100m.”If the sport needs me and I find motivation for another year, why not go a bit? What is certain is that I do not want to say goodbye with a defeat. If my coach says I can still win, I trust him”, he added.

If running besides an athlete that had already had problems with doping bothers Bolt? “What Gatlin has done in the past does not interest me”, he stated to Veja, the main weekly Brazilian magazine. Amid a series of doping scandals in athletics, Bolt emerged as one of the few positive images on the modality.

Still, the Jamaican did not flinch when asked about this issue. When Olympic champion in 4x100m relay in Beijing in 2008 Bolt had Nesta Carter in his team who years later ended up being caught in doping tests. There is the possibility of even Bolt losing his medal because of his former partner. “They test me several times each season. I would be disappointed to miss one of the meals in Beijing, but rules are rules. I always followed the rules,” he added.

A fan of other sports rather than athleticism, Bolt has already said he hopes to see Neymar playing in Rio and has been expected to attend the Brazilian men’s football semifinal on Wednesday (August 17th), in the Maracanã stadium, where Brazil will face Honduras.

Bolt also revealed which other sports he would like to see during the 2016 Games. “Definitely the swimming, I always watch swimming at the Olympics,” he said. “And basketball too  – I like watching basketball games and it’s interesting to see different countries playing each other.”

Usain Bolt has been trending on social media with Brazilian celebrities and anonymous fans posting messages cheering the racer and imitating his trade mark: the classic bolt gesture that he did among children of Centro de Educação Física Almirante Adalberto Nunes (Cefan), in Penha, a “kinda” deprived Rio’s neighbourhood, before the Olympics have started.

João Victor e Silva Souza, a 16 years old amateur runner, said in an emotional tone: “I do athleticism because of Bolt. He has inspired me”. Bolt also visited youngsters in Rio exactly two years ago, taking part on a recreative race among 100 children from Brazilian Industries Social Service – Sesi’s sport-social project Atleta do Futuro (“Future’s Athlete”) to encourage the practice of athletics in 40 low income Rio’s communities.

Kezia Ludovice, a 14 years old volleyball player from Chapéu Mangueira “favela” (“shanty town”) remembers Bolt’s energetic presence: “I also like athletics very much and he said I can do it even without having a good place to train”.