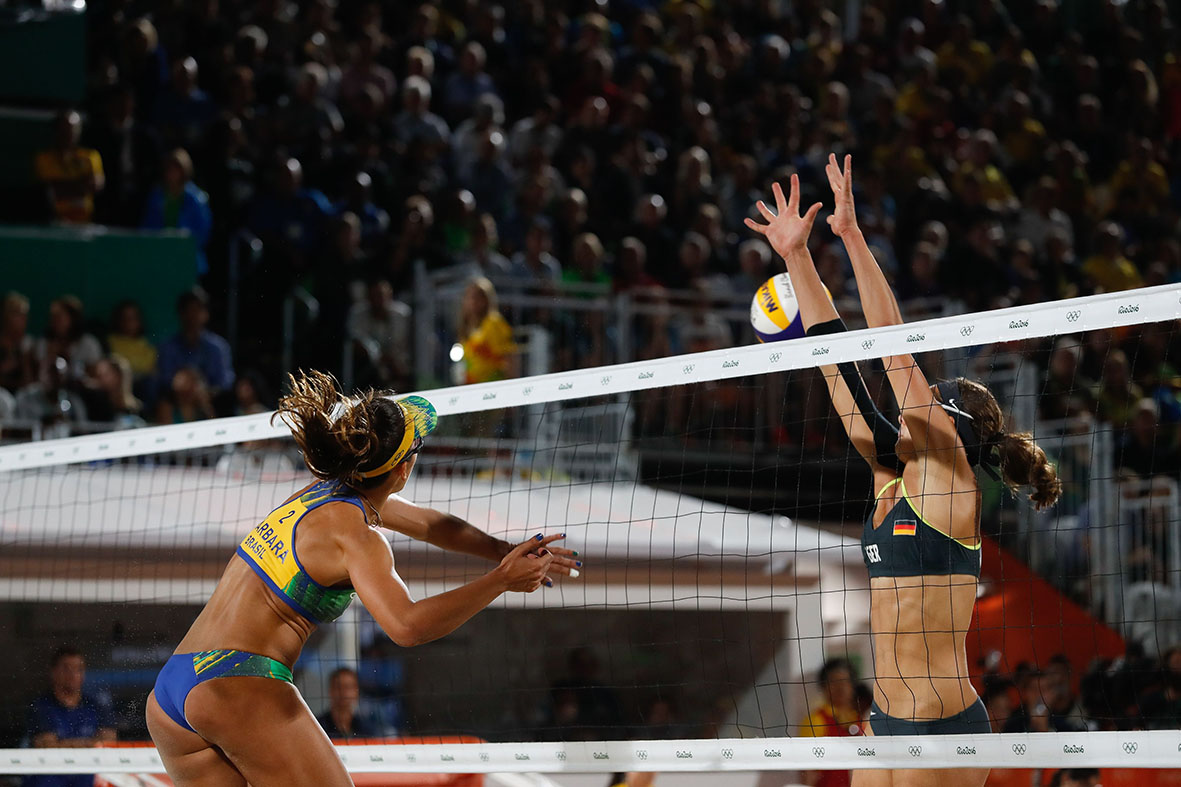 Beach volleyball is the only sport Brazil is an established Olympic power by number of medals. Photo: Fernando Frazão/Agência Brasil
ESPORTES

(Rio de Janeiro, brpress) - When not financed by the Military (eight of the ten Brazilian medalists are employees of the armed forces)   nor the government, the best results come from the beach.

(Rio de Janeiro, brpress) – At the same time that in Brazil most amateur sport activities are chiefly financed by the practitioners’ families,  sedentary lifestyle is huge problem among poorer sections of the population. Yes, the Rio 2016 host country is full of contradictions. And when sports matters this is not a different reality. Though it is not necessary to analise a complex survey to discover that only the richest families can afford payed sports activities.

These and thousands of other figures can be found in a survey entitled National Sport Diagnosis, conducted by the Brazilian Sports Ministry, in partnership with federal universities across the country, and published in June last year. The study had only 5% of its content made available to the general public. Never-before-seen data on the topic was disclosed on an event held n the middle of the Olympic Games at Casa Brasil, in Rio de Janeiro.

Brazilian families’ expenditures with sport-related practices and equipment summed approximately $14 billion in 2013, with a monthly $30 average. The private enterprise contributed with some $580 million in the period, compared to public companies’ $140 million in funding. The federal government invested close to $434 million in 2013, an increase driven by major sports events hosted by the country.

One of the researchers for the study, Federal University of Ceará’s Professor Cássia Damiani, argues that the private enterprise should be encouraged to sponsor not just high-performance sports, but also activities that save Brazilians from a sedentary lifestyle, which affects 45.9% of the population.

“Brazil has invested a lot and made major strides over the last decade regarding investment in infrastructure. Nonetheless, to ensure universal access to sport activities, government funding is not enough; we need joint efforts with the private enterprise as well as investment as a social responsibility. The amount invested in sport by companies is still insignificant”, says the researcher.

While in the United States – the champion of medals in Rio 2016 – professional sport is 100% funded by private sources, in Brazil, even though having subsidised professional sport, won just 19 medals – its best result ever but still less than American swimmer Michael Phelps has got himself alone: 23 medals. Ok, it is a figure for Phelps life. But the fact is that sport is much more than a matter of money – its a culture, part of a whole education programme.

Professor Ailton Oliveira, also of the Federal University of Ceará and one of the coordinators of the National Sport Diagnosis, highlights that poor schooling is usually associated with a poor sport: “Less educated people usually lack the financial means and have a heavier work load, which is why they have less time to play sports. This shows that, in order to give everyone access to sports, better social and economic standards are needed”.

The Brazilian Olympic Committee’s objetive was to get the country at least among the top 10 medal ranking. Despite Brazil was on the 13th position in Rio 2016, the government announced that day after the Games were over that Bolsa Atleta and Bolsa Pódio, both subsidy programmes granted to 358 of the 465 Brazilian athletes participating in the Olympics will be maintained at a cost of $ 6 million this year.

National Sport Diagnosis surveyed nine thousand people. Its methodology is based on a similar project carried out in Europe and implemented in 17 countries to monitor sport-related practices among the population. “It is necessary that high performance sport remain as a public policy”, believes the Brazilian Sport Minister Leonardo Picciani.  Since 2009, when Brazil was chosen to be the host for the World Cup 2014 and the Olympics in 2016, the sports subsidy programmes have consumed a sum of $ 1.25 billion.

The fact is that when not financed by the Military Forces (eight of the ten Brazilian medalists are employees of the armed forces)   nor the government, the best Brazilian sportspeople come from its beaches where Brazil has delivered its most outstanding performances in its Olympic history.  Beach volleyball is the only sport Brazil is an established Olympic power by number of medals. It was introduced into the Olympic games as recently as in 1996 in Atlanta, and 20 years after, Brazil leads the number of medals with 13 podiums.

Considering the number of gold medals alone, the United States still leads with six medals, against Brazil’s three. However, the US has a total 10 medals, compared to Brazil’s three gold, seven silver, three bronze medals, a total seven won by the women’s teams and six by the men’s.